There is a Viking invasion coming to Busch Gardens in 2017. InvadR, the new roller coaster, currently being built, is slated for a Spring 2017 opening. Last Monday, we were invited by Busch Gardens to check out InvadR’s lead cars before they head to the 2016 IAAPA Attractions Expo for the full reveal next week. 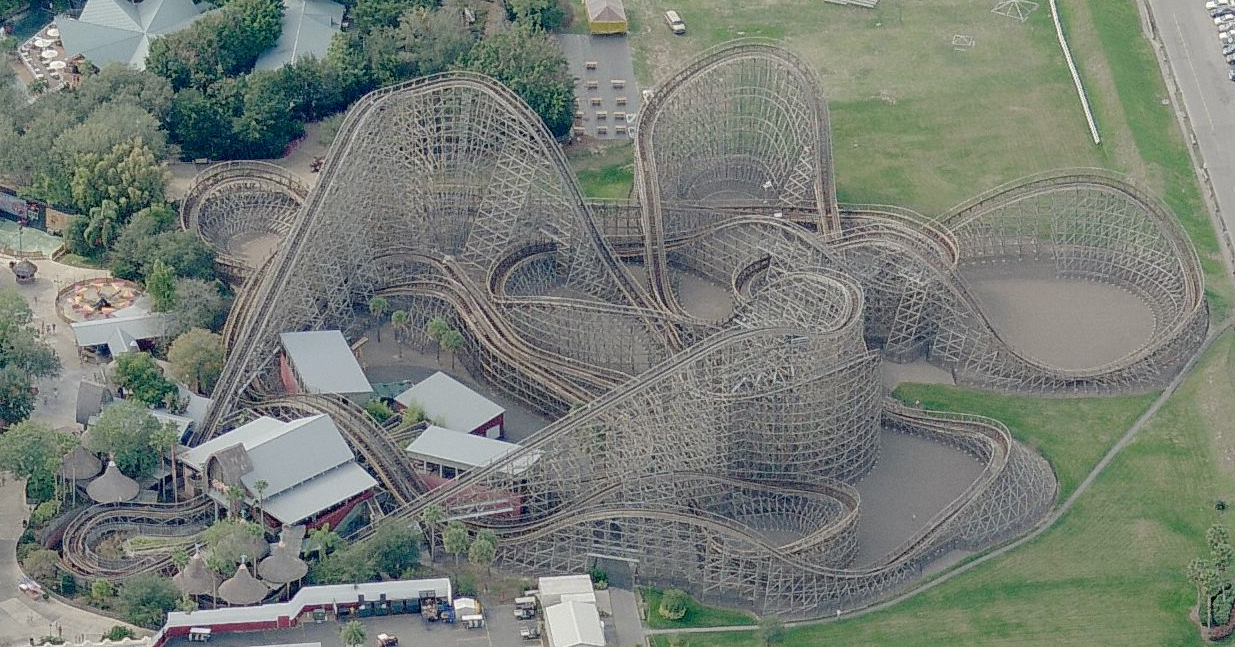 If any of you have visited Busch Gardens Tampa, these trains may look a little familiar….they are the trains from the now torn down Gwazi wooden coaster. Gwazi opened in 1999, and was the first “Dueling Coaster” in Florida. It had 2 separate tracks and the 2 sides would “race” each other. As the years went on the ride got a little too rough, so in 2011, BGT revamped the ride and replaced the original trains with these brand new Great Coaster International “Millennium Flyer” trains. Apparently that still didn’t fix the rough issue and due to maintenance costs and guest lowered interest, the ride was closed for good in early 2015. Instead of scrapping these new trains, they sent them up to BGW in April of 2015 for storage.

Worried about them using recycled trains? Well don’t be, everything on them has been upgraded, refurbished or replaced. Here’s a list of everything that has been done:

1. Refurbished Chassis – The chassis were stripped down, sandblasted and re-painted. They also went through non-destructive testing to ensure the integrity of each car.
2. New Seats – The old upholstered fabric seats were removed by BGT before they were sent up to BGW. The new seats are form molded seats and are very comfortable.
3. New Wheels and Carriers – The wheels and the wheel carriers are brand new on these trains. The also added a maintenance “Lift Off” wheel, which will allow maintenance to lift the whole car off the track for wheel maintenance.
4. Harness Monitoring System – This is an upgrade that the original trains did not have.
5. New lapbars – The lap bars also will lock into place when in the upright position which will allow for the guest to use it to pull themselves up out of the seat.
6. Original Teak Wood Refurbished – The original teak wood around the front of the car has been beautifully reconditioned by BGW’s paint shop.

There will be two, 8 car trains that will hold 16 passengers per ride. There is also a front “Zero Car”, which will hold some of the ride’s themeing.

Most of the refurbishment is being done in house by the BGW crew. They are also getting assistance from GCI, the manufacturer of these trains. GCI sent a rep to assist in assembling the first two cars seen in the pictures. This shows that BGW takes their coaster builds serious and brings in technical experts to ensure there are no mistakes are made when building this new coaster.

In these pictures, you can see a lot of the new and refurbished parts for the InvadR cars. The first image shows the chassis on the right, and what looks like the seat uprights in the center. The other pictures show various parts, like the wheels, axles and more chassis parts.
Here are various images of the GCI “Millennium Flyer” train cars. It’s the two front car along with the “Zero Car”. The two colors I believe are to denote the “Vikings” car(Teal) and the “Villagers” car(Tan).

Coaster lovers have long complained that the only type of coaster missing from Busch Gardens collection is a wooden coaster. Now that complaint is being answered. With Kings Mill being so close to the park, loudness was a critical part as to why a wooden coaster has never been built. Wooden coasters are known for being loud due to the lift hills and the way the wheels ride on the steel track. When I asked about the noise levels, Wayne Shelton, Supervisor of Rides responded with: “We have a system on ours, that’s going to limit the noise when the train goes up the lift. It’ll be somewhat traditional, but it’ll not be as loud.”.

This will not be a full wood coaster, it’s a hybrid. It’ll have the same wood tracks as a normal woodie, but it will have steel support beams. This hybrid gives you the feel of a real wood coaster, but saves a ton on maintenance costs.

InvadR is a family coaster, with a height requirement of just 46″. So this really will start to fill the gap between Grover’s Alpine Express(42″ HR) and the LMN(48″ HR). It has a 74′ drop through an underground tunnel and 9 “bunny hills” which will give you that weightlessness feeling most people enjoy on roller coasters. I have a feeling this will become many kids first coaster.

Some constructions photos of the track. The first is the station building with the track heading down toward the lift hill. The forth is a shot of drop that heads down into the tunnel that goes under the service road. The 5th, is hard to see, but it’s the exit track coming out of the tunnel. That’s back behind Le Scoot’s sawmill. This coaster and it’s theme will fit perfectly into the Trapper’s log cabins and wilderness feel. It’s story concept is that the people of “Trapper’s Village” and huddled into their fort trying to ward off an invasion by Viking “InvadR’s”. They must defend themselves against the Vikings or they will perish. It seems as though the colors of the trains will denote the Vikings(teal) and the villagers(tan).

The first photo shows the exit area. The long structure will house the lockers, the tall building will be the ride photo building. You can also see some of the pointed logs of the villager’s “fort”.

Something Unearthed During Construction

Scarlett’s Unearthed House is not the only thing found at the back of the park. (2015 HOS Reference)

While we were talking near the construction site, Suzy Cheely shared an interesting story with me. During the digging of some of the foundations, the contractors found a “wooden structure” that no one knew was in that area. They called on one of the long time maintenance guys who was able to identified the structure as the “Ball Crawl” from the old Eagles Nest Village kids play area. The Eagle’s Nest area was a child’s play area that consisted of a ball pit(Ball Crawl), Cloud Bounce(bounce house) and the Punching Bag Forest. In the late 70’s, early 80’s this area was housed underneath the log flume. I’m not sure when it was removed. I guess parts of it weren’t really removed, but just plowed over and covered. Before the renovation of Le Scoot, some of the area paintings could still be seen at the base of the flume’s posts.

We want to give a big thank you to Nathan Warter and Ron Vample for setting up this visit. We truly appreciate all that you do for us. We also want to give a thanks to Suzy Cheely and Wayne Shelton for taking the time to speak with us about the ride.